I wear many nouns: fiction writer, playwright, memoirist, folklorist, actor, teacher, arts producer, and director. Involvement in all the arts forms inform the others. I learn whenever I teach. I learn whenever I work in a theatrical ensemble. I am usually working on more than one project simultaneously.

I’m conducting three grief workshops with powerhouse poet Gayle Danley via the Enoch Pratt Library and CityLit Festival this month and early next. We intend to use writing as a process to sort thorough the muck of grief. Baltimore Magazine featured the story.

I’ve re-keyed my old screenplay, Next Door, about the mud monster drowning people in their basements across Baltimore and my theatrical play, The Return of the 5th Sister, as a screenplay. I’m writing some Baltimore memoir and intend to revise my romance novel, Night Narrative.

Parlor Thespians hosted a reading of The Docents. It was good to revisit that old friend. The story of the protection of art during war might be make a good screenplay.

My friends Lance Bankerd and Mike Barton produce this adorable and hilarious House of Bankerd State of the Arts podcast. They interviewed me about creating art in Baltimore.

My friend Big Mama Ama Brown at Be Exposed Radio interviewed me and Kafi D’Ambrosi about arts engagement and partnership in Baltimore.

Judy Rousuck interviewed me and Baltimore Playwrights Festival Chair Michael Stricker on WPYR about the addition of book-in-hand readings to the summer 2016 schedule.

DC MetroTheaterArts nominated Stillpointe Theatre Initiative’s first production of my science fiction play, The Benefactor, in their Best Plays in Professional Theaters of 2015 category. Thanks, Stillpointe and creative team!

For the five summers from 2012-2016, taught American students playwriting in Northern Ireland. Thanks to funding from UB Foundation, filmmaker Peter Salisbury created a trailer from AP15.

Judith Krummeck of WBJC interviewed me about my latest play production, The Benefactor. Follow the link to hear Judith’s amazing bell-like tone. 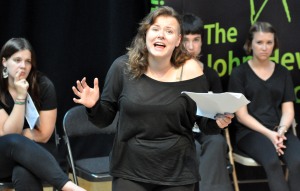